»We are always coming from somewhere. That is not in our nature but is of our language. But perhaps our language is in or of our nature?« 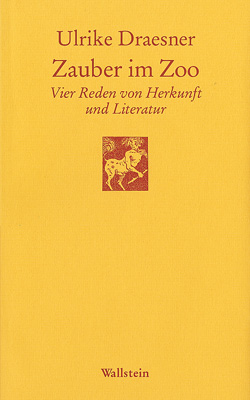 Four addresses on Origin and Literature

Origin refers to how we speak of who one has become by inventing who one was in order to become not who one ought to be but who one finds oneself capable of inventing.

What does „being at home“ mean once one has gone away – either voluntarily or as a refugee? As a foreigner you will be drawn into the force-field — at once familiar and unfamiliar — of what used to be „home“.

Origin is the theme of this book. Since everything which makes up the world for us appears within the matrix of language, in the bright light of its metaphors and the jack o’ lantern reflections of its idioms, the text deals with the way in which origin is not only invented in order to tell stories, but is itself a story.

The work has an ear for the frictions between the ways in which bodies are created and language itself as a creative inventory. It sets down the process in which a literary text evolves. It follows up the tension between what we call reality and that which bears the name ‚fiction’. The idea of returning home, of being at home, and of homeland are artificial and artistic cultural constructs. Numerous examples from the history of literature and from Ulrike Draesner’s work illustrate this vividly up to the point where the author, for the first time, tells part of her own „story of home“ in all its ambivalence.