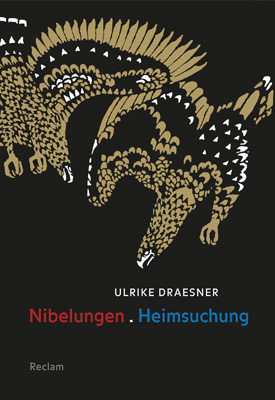 With the illustrations by Carl Otto Czeschka.

The powerful Jugendstil illustrations by the Viennese-Workshop artist Carl Otto Czeschka in 1908 are of legendary quality. They are considered no less than a pinnacle of book illustration, and are among the best-known art works of Jugendstil. When the first edition appeared these unique pictures were accompanied by a non-literary retelling of the Nibelungen saga.

For this opulently produced new edition of the heroic epic, the poet Ulrike Draesner (who holds a doctorate in Old and New German Literature) was asked to write her own, highly personal version of the Nibelungen. Thus a cycle of modern lyric poetry emerged around the treasure of the Nibelungen, in which Ulrike Draesner, via the subjective experiences of the four protagonists, captures the plot in tone and personal experience: the voices are those of Kriemhild, Siegfried, Brunhilde and finally Hagen. An epilogue features Kriemhild’s sons with a Nibelungen computer game before the voice of a narrator and poet are heard: „Time and again I marvel …” In 17 mini-stories she reflects about the epic’s intricately woven nets of loss and betrayal, guilt and destiny. „The Song of the Nibelungen tells me that there are situations in life when that which you loved and lost and still love comes winging – unhoped for, unexpected, shocking and beautiful — through the air to you. This is something I will not forget.”

„A jewel plucked from the Nibelungen treasure.“

Ulrike Draesner in conversation with Jan Drees on Radio Germany

„One does not have to be familiar with the bewildering details of the Nibelungen epic to be moved and fascinated by Draesner’s evocations of its central themes.“