»Take to your juggernaut, immensity, . . . come rolling down to us!« 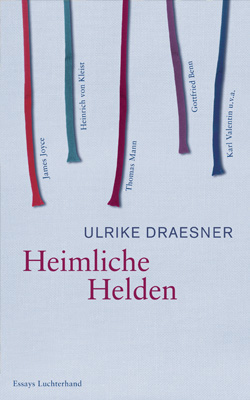 Accurate, surprising, and respectfully perfidious portraits of great writers – from a woman’s perspective.

Literary greats: the overwhelming majority are male. A wasteland for women readers? Not at all. The virtuoso reader Ulrike Draesner presents her very own hall of fame of male writers: accurate, surprising, and perfidious portraits of heroes such as Heinrich von Kleist, Thomas Mann, James Joyce, and many others.

Men have it hard; they have to be heroes. Many of those authors now regarded as ‘classic’ once sought to play the role of the warrior and hero. But is there not something unheroic, per se, something even subversive, about writing? Ulrike Draesner traces the origins of the notion of the hero, presenting writers in their heroic and charmingly unheroic poses and recounting with astounding wisdom and great originality her own adventures as a reader. And just as in the essays considering ‘Schöne Frauen’, Flaubert snuck in amongst the assembly of women authors, Tania Blixen is also granted a place amongst the hidden male heroes.

‘Ulrike Draesner’s essays show how people get pulled into wars, sometimes merely through the wrong marriage or through a career choice. And she considers the escapes, the hiding places, and the damages. Fortunately, this does not result in some hero typology, but rather a complex space rich in anecdotes, and an inspiration to read particular authors once again.’

‘Is the author a heroine? Are her characters heroes? These and other questions are addressed by the author in very intensive essays, with some unexpected answers. The entire book is just as unexpected as it is enlightening.’