»in an other place, distant wood of arganias vowels fall from the word „hammam“
h-mm-m …
hmm« 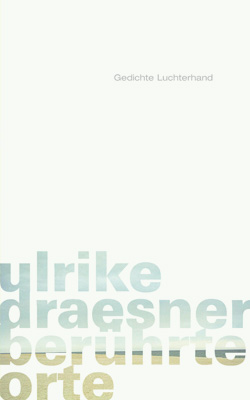 Travel: a longing. An adventure. A frenzy. How long does it take to learn to walk on one’s heels to a pool of water, as camels do? To understand that ‘cbrt rntl’ means oriental cabaret? How do we approach places that smell of sweat, of fire, of people and primal fear?

Ulrike Draesner’s poems have long been journeys, expeditions to the centre of perception, the very edges of the physical, and suddenly into a world radiant with light. In ‘berührte orte’, Draesner casts a net of language in search of the places she has visited, fishes for the historical and religious spectres, the traces in film, literature, and newspaper cuttings, of cities such as Damascus or Casablanca and allows these realities to vibrate through her writing. How to capture it, this sugary, intoxicating aroma of … nothing? Witty observations, the courage to step into the unknown, are as much a part of the writer’s toolbox as a resourceful use of language and poetic tradition. The collection maps less distant lands, too, cities that appear more familiar to the common European. The poems probe the problematic, joyful relationship between places and words by way of Lessing’s forest and Brecht’s Denmark. Yet nobody can speak of travel without reference to home and the pleasures of staying rooted: at the centre of ‘berührte orte’ is an ode to the revolving office chair.

‘Honest, playful, a delight for all the senses, Draesner’s poems are a constant exchange between an internal and external world.’

“Anyone writing essays should not only be able to write but also to think – and they should be able to do both elegantly. Lyricist and prose writer Ulrike Draesner has shown what the result can be.”